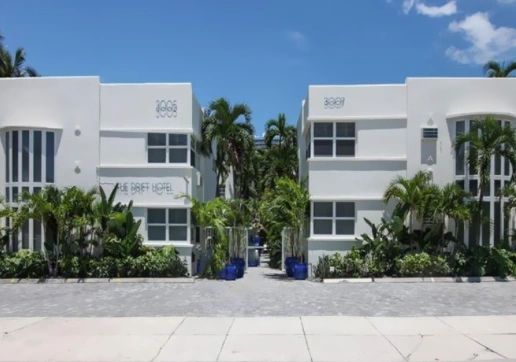 The 23-room Drift Hotel in Fort Lauderdale has sold for $3.3 million to an Aventura-based hotel operator.

The Drift Hotel in Fort Lauderdale has been sold for $3.3 million.

The new owner — identified only as an Aventura-based hotel operator — intends to operate it as a hotel, real estate firm Coldwell Banker Commercial NRT said Friday.

The 23-room, two-building hotel at 3005-3007 Alhambra St. is about a half block from the popular Fort Lauderdale beachfront strip.

The property was marketed extensively, including on the Internet, by using a video taken from a drone and through outreach to a database of real estate principals and brokers, Coldwell Banker said.

The seller received multiple offers, and the buyer closed on the sale within 45 days of signing the contract.

As of early Friday, Broward County property records still listed the property's owner as Drift Hotel Inc., whose officers and directors are Christopher and Lisa Grossman, according to Florida corporation data.

Investors have been gobbling up other property along Alhambra Street in recent months.

OTO Development of Spartanburg, S.C., recently bought a nearly 1-acre parcel stretching from 3017 to 3029 Alhambra St. with plans to build a 10-story, 175-room AC Hotels by Marriott on the site.

In November, city commissioners approved the AC Hotel project, which will feature an elevated pool and pool deck and tapas-style restaurant.

Construction on the Marriott-branded hotel is expected to begin this year and take about 18 months to complete.

OTO Development currently has five South Florida hotels in its portfolio, including Hyatt House and Hyatt Place properties in Fort Lauderdale and a Homewood Suites and SpringHill Suites in West Palm Beach, according to its website.